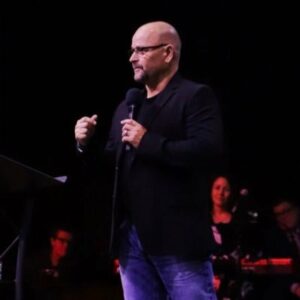 Chris Fields is a former member of the Oklahoma City Fire Department, Chris joined the fire department July 12, 1985 promoting through the ranks and retiring as a Major March 1, 2017 serving the citizens of Oklahoma City for 31yrs and 7 months.

Chris was captured in a photo that became an iconic symbol of the Oklahoma City Bombing in 1995 when he was cradling the body of 1yr old Baylee Almon.

Chris is now dedicating his life, and travels to speak to other 1st responders, he discusses the brutal realities of a life spent responding to citizens in their darkest hours. Routinely placing others before himself and representing the greater good in all of us. Chris tells the story of his life, his 31yrs of public service, and how that day in 1995 all combined to take a toll on his life and his family, he suffered in silence for many years.

Now he shares how with God, Faith, and Family he took control and his journey out of the suffering in hopes of helping others avoid the failure, the pitfalls, and to reach out.

“I was shocked when I reached out, how many people were reaching back, I want 1st responders to know its ok, not be ok sometimes. It’s all about changing the narrative and breaking the stigma of reaching out for help. As heroic a calling as our profession seems to many, to me it’s just as heroic if not more to speak up, reach out. Be a hero to yourself and your family.